Hello! Obviously I have not been good at keeping a blog! I am busy and distracted by life, in fact, I often forget that I even have one. The last six months have been filled with changes for our family.

Last January I was referred by a friend to a new chiropractor, Dr. Kate. She helped me immensely, after a month of treatment I felt better than I had in years. She erased nearly all of my daily fibromyalgia pain, leaving me to deal only with the flair ups and migraine headaches. Try as we might, we couldn’t figure out how to control my migraines and they became much more intense. I was getting at least 2 severe migraines a week, often times affecting my vision and balance.

By early April I was forced to deal with the idea that God had told me to leave my current job and I was being disobedient. It was crazy, stupid, and irresponsible – but I knew that God wanted me to leave without a plan, to trust that he would provide for our family in some way. It was the most difficult decision I have ever made, and by far the scariest. My last day employed outside the home was April 26th, my last migraine was April 25th. I need no other proof that leaving my job was the right decision. Additionally, God has been faithful and provided for our family. While we are not financially better off than we were when we had two incomes, we are not much worse either.

The peace of knowing that I was following God’s leading led to a much less stressful summer. I knew that our finances were not in our control, we would do what was within our power and trust God. All of our bills are current, there is food in the fridge, and the kids have all the clothes they needed to start school. Of course we still have needs, wants, and desires; but I am much more content. Also, I got to spend the summer with the kids! Because they only have 7 weeks off, we tried to cram as much as possible into them, camping trips, Rox baseball games, splash parks, bike rides, movies, sleeping in, etc. It was wonderful for me to spend the time with them knowing that I didn’t have to be searching for a job (I was still looking, just not desperate).

School started August 8th, Dayton is in middle school as a 5th grader and Adrianna is a 2nd grader!!! 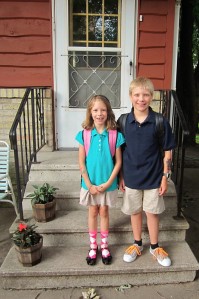